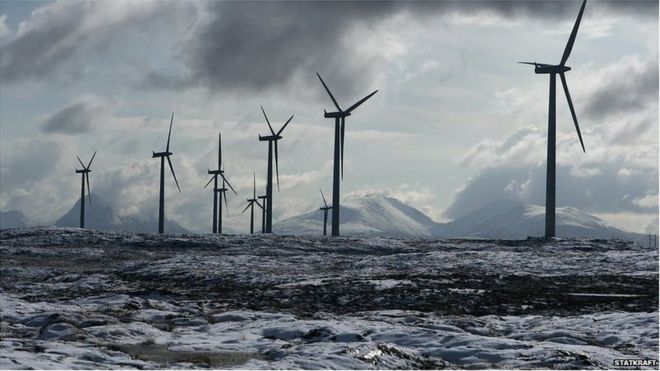 Painting one blade of a wind turbine black could cut bird strikes at wind farms by up to 70%, a study suggests.

Birds colliding with the structures has long been considered to be one of the main negative impacts of onshore wind farms, the authors observed.

The RSPB welcomed the research but said the priority remained avoiding placing wind farms where there was a risk to wildlife, such as birds.

The findings have been published in the Ecology and Evolution journal.

"Collision of birds, especially raptors, is one of the main environmental concerns related to wind energy development," observed co-author Roel May.

"In Norway, 6-9 white-tailed eagles are killed annually within the Smøla wind-power plant; This has caused opposition and conflict."

The Smola wind farm is located on the west coast of Norway, consisting of 68 turbines over 18 square kilometres, making it one of the largest onshore wind farms in Norway.

Dr May, a senior researcher from the Norwegian Institute for Nature Research in Trondheim, said the team were keen to test whether mitigation measures could reduce the rate of bird strikes.

"One of the mitigation measures we tested was painting one of three rotor blades black," he told BBC News.

"The expectation is that this design reduces so-called motion smear, making the blades more visible to birds. 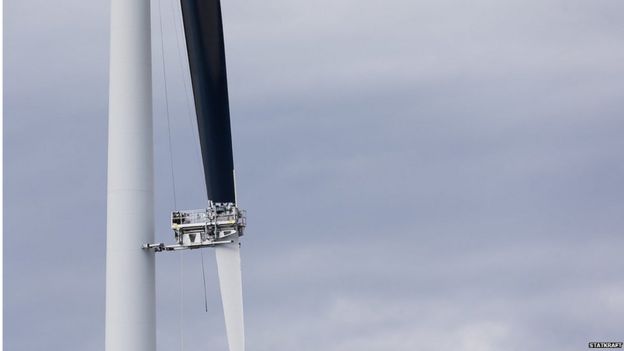 Image copyrightSTATKRAFTImage captionPainting one of the blades on a turbine is believed to reduce "motion smear", allowing birds to see the rotating blades

Dr May said the concept of reducing the motion smear of the rotating blades was based on laboratory experiments carried out in the US at the beginning of the century.

The authors observed: "The annual fatality rate was significantly reduced at the turbines with a painted blade by over 70%, relative to the neighbouring control (i.e. unpainted) turbines."

Dr May said that the findings were encouraging but further testing at different wind farms was needed in order to make the findings more robust.

He observed: "Although we found a significant drop in bird collision rates, its efficacy may well be site- and species-specific.

"At the moment there exists interest to carry out tests in the Netherlands and in South Africa."

Martin Harper, the RSPB's director for conservation, welcomed the research but said it was important to remember the development of wind farms needed to "take place in harmony with nature".

"Wind turbines are the right technology when we find the right places for them, so studies like this are valuable and build on our understanding of what additional mitigation could be used once we identify locations suitable for wind farms," he said.

"As the report acknowledges, this studied a single site and more work needs to be done, so we would be interested in seeing more research in this area."

Meanwhile, a spokesman for manufacturer Siemens Gamesa said the issue was one for developers and operators of wind farms to consider, rather than manufacturers. 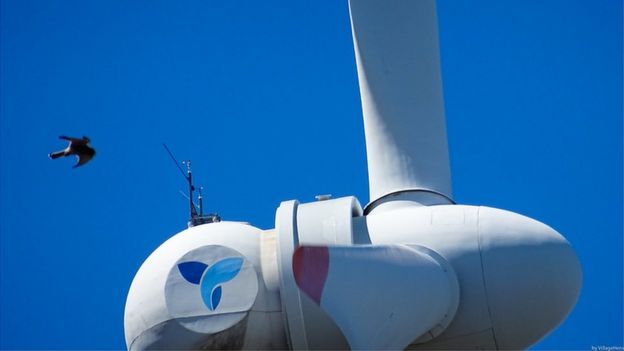 Image copyrightVILLAGEHEROImage captionConservationists recognise the importance of onshore wind farms, but say that they must not be at the expense of wildlife

He told BBC News: "We don't take part in the ongoing running of a wind farm, so we're not familiar with instances of bird strike."

But he added: "We could manufacture to a specification laid down by the developers."

A spokeswoman for ScottishPower Renewables, which operates the UK's largest onshore facility - the 539MW Whitelees wind farm in Scotland, described the study as "definitely an interesting development".

She said: "Our approach to wind farm development takes account of the local bird population right from the very start."

"That includes careful planning to ensure we pick the right locations in the first place; and we also work closely with the likes of RSPB and Scottish Natural Heritage to ensure we do everything we can to protect local wildlife."

Dr May said he would like to see wind farm developers adopt mitigation measures, such as the painted blade, where it was proven that bird strikes were an issue.

"If done prior to construction, it will be a very cost-effective measure that may help reduce unnecessary conflicts," he added.

"What hasn't been tested yet, is whether other rotor blade patterns (e.g. red blade tips as used to warn aviation) might be equally effective.

"Any improvements (or co-benefits) of the design could be interest for further study. This does however not preclude implementation of the current design."